To understand Fatima, one must begin far away, across the continent in fact, in Russia.

'What underground currents will bind together the two extremes of Europe: this little Portugal, planted on the edge of the Atlantic Ocean, and that immense Russia, at the other end of Europe?

For seventy years now these underground currents have existed. It was not through the invention of reputable ideologies, but through the simple confession of three humble children, to whom the Virgin Mary appeared here and to whom she spoke. And she appeared precisely in the year and in the month (according to the Russian calendar) in which the revolution established the dictatorship of the proletariat and the atheism of the State of Russia. None of the children had heard the name of this country before, lost as they were on the heights of an arid rocky mountain region, watching their flocks, belonging to families where letters were not part of the daily bread that was eaten. But it was these children who transmitted the message heard from the lips of the Lady:

"Russia will spread her errors, but finally she will be converted." The fulfillment of this prophesy...we see today in our midst, the first Apostolic Administrator for the Latin Catholics of the Republic of Russia, with his seat in Moscow, the Archbishop Dr. Tadeusz Kondrusiewicz.'

This is an extract from the homily delivered by Bishop Manuel Trindale on October 13th at the Mass celebrated in Fatima in 1991, on the occasion of the seventy-fourth anniversary of the final apparition of the Mother of God when Fatima welcomed the first pilgrimage from Moscow. (Fatima, Russia & Pope John Paul II, Timothy Tindall-Robertson, pp 115-122, The Ravengate Press)

There are no coincidences with God. One of the first things I read upon return from pilgrimage was a story from Inside the Vatican that the same pilgrim to Fatima, 'Tadeusz Kondrusiewicz, the Catholic archbishop in Moscow for the past 16 years had celebrated his last public Mass before his departure to Minsk, capital of Belarus.' (Dr. Robert Moynihan, MOSCOW, Russia, October 28, 2007)

So for sixteen years now, Russia and many dedicated Catholics--both there and abroad--have been rebuilding the Russian Catholic Church from the ground up. That there exists a church, any Christian church for that matter, in that former atheistic state is nothing less than a miracle. And yet it is true. Joyfully, many of us can say we lived to see Communism fall in the former Soviet Union. Russia is Russia once more. But we cannot forget, that but for the intervention of Our Lady, the faith of three young children and the prayers of millions, there would have been no church in Russia to rebuild.

All the ironies in the story struck me anew--the immensity of Russia and the smallness of Portugal. The supposed mightiness of the Soviet Union and the relative political insignificance of Portugal. The terrible losses suffered by the Soviet Union not only during World War II, but also under her Communist leaders, especially Lenin and Stalin. And what about tiny Portugal? Our Lady promised her mothers to keep their sons out of the second World War and she did, because of their faith and prayers.

Many of these things were on my mind and in my heart when I traveled to Fatima. I lived for nine years ('81-'90) in Europe during the Cold War. I left Germany just after the Berlin Wall came down and I remember what a happy time it was. Communism had been 'defeated' and the full terror of 'terrorism' was not yet understood, well at least not by me, and probably not by most average Americans I suspect.

But evil is always present in this world and one tyrant vanquished only made room for others to assume prime positions. I was just too naive to realize this then.

Since my return from pilgrimage a week ago today I've been trying to figure out how to write up Fatima--as a chronological monologue, as a travelogue, as a series of reflections on my photos or some other way--but so far none of my writing seems to be going anywhere. So I guess I'll just keep plugging away, praying and hoping God shows me how to document my journey, a pivotal place, and this incredible story. It's so miraclous, no mere words can ever do it justice.

So I beg for your prayers for this endeavor and also call your attention to something our group of pilgrims noticed while we were at Fatima.

There was no American flag. Can you believe it? In the processions, there were flags from many nations -- certainly not every country, but many -- but no American flag. It made me feel so bereft. I can't explain it--why the United States wasn't represented in this symbolic way. There were certainly plenty of other American pilgrim groups there besides even our small group, which mostly consisted of Catholics from California and Hawaii. I suppose each country's delegation brings their own flag, but I don't know the protocol for such things and did not have the opportunity to check this out given our limited time and resources.

Still, it makes you wonder, 'Why did no one from our great nation bring an American flag to include in the procession?' If I had had a flag with me or been able to get my hands on one--no matter what size--I think I'd have hopped in the procession myself just to insure our representation. It really was a very sad day for us.

So I write this in hopes that you will spread the word about this travesty. And if you, or anyone you know, is traveling to Fatima next year or the next, or anytime in the future, will you please, please, please, bring, carry and display an American flag in the procession?!

I cannot tell you how sad I felt not to have our country visibly represented in that otherwise beautiful tribute to Our Lady. I also cannot help thinking it made her sad. I know she loves us too. She is our Mother, Our Lady of Guadalupe, Mother of the Americas. We were there. Our flag should have been there too.


"God has been very good to me, for I never dwell upon anything wrong which a person has done, so as to remember it afterwards. If I do remember it, I always see some other virtue in that person." ~~Saint Teresa of Avila
Posted by friant at 9:22 AM No comments:

Our Lady of the Rosary and "Lepanto" 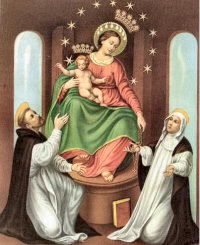 Pope Pius V honored their belief by instituting an annual feast in honor of Our Lady of Victory, which Pope Gregory XIII later changed to the feast day we currently celebrate on the date of the victory itself, October 7th. The name of the feast day was also changed to Our Lady of the Rosary.

Today I finally read the epic poem by G. K. Chesterton about the famous battle of Lepanto. Although I've enjoyed Chesteron's Father Brown mysteries, Orthodoxy, The Man Who Was Thursday and The Everlasting Man, I had never gotten around to reading this very accessible poem. If you've overlooked this very short and delightful work, be sure to check it out. You'll recognize some names you've heard before.

One test of a good read for me is if the book -- or poem -- gives me leads to other good reads. And Lepanto certainly did that. Here are just a few of the books and topics I now want to read or learn more about as a result of my brief visit with this poem: 1.) study/learn more about King Philip of Spain; 2.) finish Don Quixote by Miguel Cervantes; 3.) read Don Juan by Lord Byron; 4.) read The Ballad of the White Horse by G. K. Chesterton, and 5.) read Wisdom and Innocence: A Life of G. K. Chesterton by Joseph Pearce.

Below are just a sample of some of my favorite quotes by the man sometimes called The Prince of Paradox:

"What embitters the world is not excess of criticism, but an absence of self-criticism."

"Impartiality is a pompous name for indifference, which is an elegant name for ignorance."

"When learned men begin to use their reason, then I generally discover that they haven't got any."

"Reason is always a kind of brute force; those who appeal to the head rather than the heart, however pallid and polite, are necessarily men of violence. We speak of 'touching' a man's heart, but we can do nothing to his head but hit it."

"If there were no God, there would be no atheists."

"Love means loving the unlovable - or it is no virtue at all."

By the way, "Thanks to Aunty Belle" for the tip! If not for your timely reminder, I'd have not put the two events together. God bless you!

Gift from the Sea (RR) 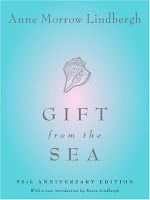 
There is so much I'd like to say about this book, but I think it's best to just let this marvelous lady speak for herself. Some of my--and other's--favorite quotes include the following...

'After all, I don't see why I am always asking for private, individual, selfish miracles when every year there are miracles like white dogwood.'

'By and large, mothers and housewives are the only workers who do not have regular time off. They are the great vacationless class.'

'Don't wish me happiness-I don't expect to be happy it's gotten beyond that, somehow. Wish me courage and strength and a sense of humor-I will need them all.'

'For happiness one needs security, but joy can spring like a flower even from the cliffs of despair.'

'For sleep, one needs endless depths of blackness to sink into; daylight is too shallow, it will not cover one.'

'Good communication is as stimulating as black coffee, and just as hard to sleep after.'

'Grief can't be shared. Everyone carries it alone. His own burden in his own way.'

'I do not believe that sheer suffering teaches. If suffering alone taught, all the world would be wise, since everyone suffers. To suffering must be added mourning, understanding, patience, love, openness and the willingness to remain vulnerable.'

'I have been overcome by the beauty and richness of our life together, those early mornings setting out, those evenings gleaming with rivers and lakes below us, still holding the last light.'

'I must write it all out, at any cost. Writing is thinking. It is more than living, for it is being conscious of living.'

'If you surrender completely to the moments as they pass, you live more richly those moments.'

'Men kick friendship around like a football, but it doesn't seem to crack. Women treat it like glass and it goes to pieces.'

'One can never pay in gratitude: one can only pay 'in kind' somewhere else in life.'

'One cannot collect all the beautiful shells on the beach. One can collect only a few, and they are more beautiful if they are few.'

'The most exhausting thing in life is being insincere.'

'The only real security is not in owning or possessing, not in demanding or expecting, not in hoping, even. Security in a relationship lies neither in looking back to what it was, nor forward to what it might be, but living in the present and accepting it as it is now.'

'The punctuation of anniversaries is terrible, like the closing of doors, one after another between you and what you want to hold on to.'

'The sea does not reward those who are too anxious, too greedy, or too impatient. One should lie empty, open, choiceless as a beach - waiting for a gift from the sea.'

'The wave of the future is coming and there is no fighting it.'

'To give without any reward, or any notice, has a special quality of its own.'