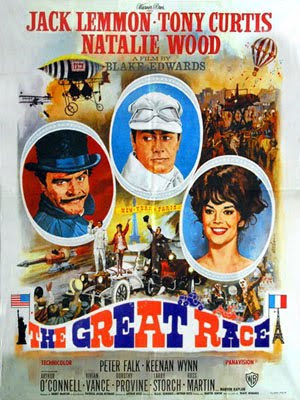 Three quarters of the way into infamous “Pie Fight” from the 1965 classic comedy “The Great Race” the clown, I mean, crown prince comes into his own and utters a line my family enjoys very much and quotes very often: “You’re banished! I’m getting a new tucker-inner! Banished! Banished! Banished!”

We all enjoy laughing at this hilarious scene, the flying pies, the immaculate Leslie, the fate of the fired royal “tucker-inner” . . . or are we really amused by the antics of the pot-bellied prince in firing his staff? That someone can actually have—and lose—such a-hem (!) a prestigious position!

Or . . . could it be we can relate to that sense of being ‘banished’? Isn’t all humor pathos turned inside out?

Perhaps—without even realizing it—we are touched at a primordial level by that thrice spoken curse.

In the first reading, Isaiah is overwhelmed by the wretchedness of humanity when he cries out, “Woe is me, I am doomed! For I am a man of unclean lips, living among a people of unclean lips; yet my eyes have seen the King, the LORD of hosts!” (Is 6:5)

And finally, in the Gospel, when St. Peter sees the incredible catch of fish which filled both boats to the point of sinking—after a night of fruitless fishing—he falls at the knees of Jesus and says, “Depart from me, Lord, for I am a sinful man.” (Lk 5:8)

Indeed we are. But it's in the coming to see our very unworthiness, our deserved banishment that we can be rescued from it.

Jesus tells Peter it doesn’t matter, to be not afraid. There is work to be done—a new kind of ‘fishing’ to do. In effect, get to it.

Words I needed to hear today. How often do I look at myself and focus on my shortcomings?! They are numerous. They are equally pointless. However I look at it, I am unworthy, but I am still called.

Called from the banishment and unworthiness of my sins and my fallen state, by the One True God who made me, loves me and has a job for me to do.

Unworthy ... but called anyway! Here I am LORD!

Posted by friant at 3:30 PM No comments: 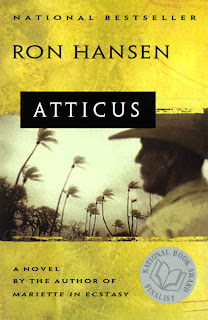 Atticus is both the book’s title and the name of the main character. Given the name’s connection to a famous novel, we are supposed to associate the ideal father in To Kill a Mockingbird with this father of two grown sons. Atticus is the modern day retelling of one of Jesus’ most beloved parables, The Prodigal Son, or as it is known in some circles today, The Loving Father. The focus of the first title being on the sins of younger son, whereas by changing the title the locus of the story shifts to that of the mercy shown by the all-compassionate father.

Without giving too much of the story away, Atticus is a widower with two sons. The older son, Frank, has obligingly remained close to his father, married, and produced grandchildren. The younger son, Scott, is a rebel. He comes home for a brief – but happy – visit at Christmas and then returns to Mexico where he lives his dissolute life. The next thing Atticus learns, Scott has committed suicide. Atticus flies south of the border to attend to his son’s personal affects and arrange to have his body returned to the United States. What he finds is nothing like what he expected.

I first encountered the author, Ron Hansen, in Mariette in Ecstasy and I was amazed by his insight and story-telling ability. Once again, he has produced a fine work of modern Christian fiction. Unfortunately it will fail to make many Christian book-of-the-month club selections due to some of the more unsavory aspects of human life which Mr. Hansen has chosen to portray. This is a loss, but only for those who refuse to read books because they are easily offended. I can assure sensitive readers that Mr. Hansen never goes out of his way to shock through excess, which is what I take exception to in so much of what masquerades as literature these days.

Although it could just be the locale, Atticus occasionally reminded me of Graham Greene’s 1940 novel, The Power and the Glory. I think it was a bit more than the sun-baked Mexican landscape that had me thinking of Greene’s whiskey priest, however. No doubt the younger son, Scott and his unsavory lifestyle, especially his unwillingness to give up his mistress, was reminiscent of Greene's character. Hansen’s writing, although not yet on par with Greene’s, is exquisite. His book goes down like a cool drink on a hot day.

I’ve always loved the Parable of the Prodigal Son, but then I expect most people do. It’s easy to see oneself and God in it, which is the purpose of all of Scripture. We are called to locate our sinful selves in the place of every sinner in the Bible. This parable has the redeeming quality of a visible, tangible, all-forgiving God who rushes out to meet us—despite what we actually deserve. In Hansen’s book, the father persists in loving his son despite circumstances and actions which seem to render him all but impossible to love. Oh but for such a father when we are similarly unlovable!

Here is a passage from Atticus which says it all:

‘She told him, "When I was in college I read a folktale about a father pursuing a son who'd run far away, from one world to the next. The father called to him, 'Please come back!' But his son looked across the great gulf between them and shouted to him, 'I can't go that far!' So his father yelled to his son, 'Then just come back halfway!' But his boy replied, I can't go back halfway!' And finally his father shouted, 'Walk back as far as you can! I'll go the rest of the way!'"’

Yes Lord, I’m walking … and looking for You! Please come the rest of the way!

Check out my books on Goodreads!

Posted by friant at 4:53 PM No comments: