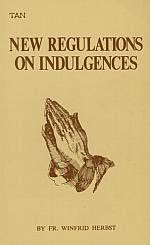 Let’s be up-front about things: when you say the word, ‘indulgence’ or ‘indulgences’ to most people—including most Catholics—some grotesque system of medieval fraud and abuses is often the first thing to come to mind. Sadly, this misconception persists in spite of the deep-seated psychological need within most human beings to do something to ‘put things right’ after becoming aware of lingering guilt from past sins and transgressions, never mind the Biblical basis for this most ancient of Church traditions.

This little gem of a book defines¹ clearly and simply what an indulgence – with a small “I” – is and then gives the two types: partial and plenary. There is no more ‘determination of days or years as regards partial indulgences, only the words “partial indulgence” are used. This does away with the need of trying to explain what is meant by so many days or years. How much (temporal punishment) will be remitted depends upon the “the degree to which the charity of the one performing the act is greater, and in proportion to the degree to which the act itself is performed in a more perfect way.”’ (page 22)

What I found most enlightening about this book was when I recognized the three general ‘concessions’ under which partial indulgences are given. The first I learned is prayer or, raising the mind and heart to God in frequent invocation. After that, the text of the book gives reference after reference from Holy Writ reminding us of the importance of constantly calling on – and out to – the Almighty: Matthew 7:7-8, Matthew 26:41, Luke 21:34-36, Acts 2:42, Romans 12:12, 1 Corinthians 10:31, Ephesians 6-18, Colossians 4:2, and 1 Thessalonians 5:17-18, “Pray without ceasing. In all things give thanks.”

And what is the second general concession? Have you guessed it? It’s the giving of oneself or one’s goods in the service of those who are in need, i.e., in more quaint terms, almsgiving. So I don’t have to tell you, do I, what the third concession is … it’s fasting, or when one (in a penitential spirit) of one's own accord abstains from something permitted and pleasing.

According to St. Peter Chrysologus, 5th century bishop of Ravenna, Italy, and Doctor of the Church,

“There are three things, my brethren, by which faith stands firm, devotion remains constant, and virtue endures. They are prayer, fasting and mercy. Prayer knocks at the door, fasting obtains, mercy receives. Prayer, mercy and fasting: these three are one, and they give life to each other.”

But going back even earlier in The Book of Matthew, Chapter 6, Our Lord also tied these three disciplines together, teaching us to fast cheerfully, give alms secretly and pray privately.

A very affirming quick read. Indulgences have gotten a bad name and one they don’t deserve. We need them, along with every other help God and His Church can offer us.

¹ "An indulgence is the remission before God of the temporal punishment due to sins whose guilt has already been forgiven, a remission which one of the faithful, properly disposed and under certain definite conditions, can acquire through the Church which as a minister of the redemption authoritatively dispenses and applies the treasure of the satisfactions of Christ and the saints."
Posted by friant at 4:50 PM