Be Thankful For PM Harper & Conservatives 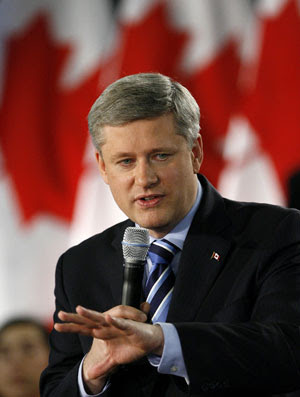 Prime Minister Stephen Harper.
He does his job very well, especially considering the difficulties and odds he faces, vis-a-vis a minority-government situation, a global recession, a perpetually, pathologically hostile "news" media and such.  He's made Canada a world leader.  Let's give him plenty of time to continue with his work...
Perspective here...

Yup. A blog post by a regular, ordinary Canadian reminding us of what matters.

The sort of stuff you won't get from the "mainstream" newsmedia, which is clearly in the tank for the Liberal Coalition and closed-mindedly, dogmatically, pigheadedly opposed to all things Conservative just because they think there's something wrong with doing what's proven to work (capitalism, freedom, democracy, the rule of law, traditional values, and strong national defence capability to help ensure that no foreign entity can take these things away from us, plus robust defence of national constitutions against those who seek to scrap them to pursue a radical, dangerous agenda) and being careful not to do stuff that's proven NOT to work (ie. socialism-communism-fascism, which is what the "Progressive" "Liberal" "Left" wants to impose upon us against our will).
Posted by friant at 12:31 AM