Business Council of Alabama's Ralph Stacey, and quotes an (unpublished) letter to Montgomery Advertiser Editor Wanda Lloyd  questioning the cause of death and asking why there was no follow up coverage. 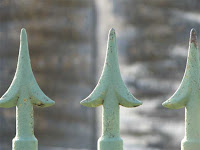 There is a longstanding policy in most newsrooms to avoid reporting suicides, period. There are exceptions...when the death occurs in a public place or in a spectacular way, or when the suicide victim is a public figure.
While Stacey's death was in an office building as opposed to a home, it's still not quite the old House Chamber in the State Capitol or the center of Dexter Avenue. And while he was known to people in the media and corporate world, he hardly qualified as a public figure.
At WAKA we reported the death, but not the suicide aspect of it. I saw the Advertiser story and also felt it was oddly written.

Journalists are people too, and suicide is such a guilt-ridden kind of death that we sometimes do everything we can to avoid adding to the hurt the victim's family is already feeling.
Posted by friant at 2:29 PM