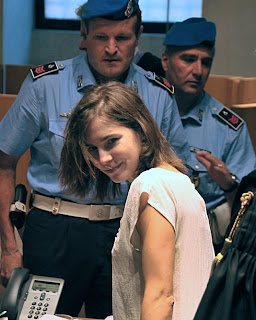 Nancy Grace has weighed in on the Amanda Knox case.  It is interesting to note that Nancy Grace came to the same conclusion that analysis of Amanda Knox' statements indicate.


“I was very disturbed, because I think it is a huge miscarriage of justice,” Grace said. “I believe that while Amanda Knox did not wield the knife herself, I think that she was there, with her boyfriend, and that he did the deed, and that she egged him on. That’s what I think happened.”


To this, the statements made by Amanda Knox (and email) agree.  Amanda Knox was guilty, in concert, of the murder.  Her legion of male love lorn supporters now rejoice, while Meredith's family's pain goes on. Supporters used everything from taunts and insults, to the linguistic gymnastics of hyperbole to plead against the verdict, and condemn anyone disagreeing with them.
In Knox’s final plea, she told an Italian appeals court that she was not present the evening her British roommate Meredith Kercher was sexually assaulted and brutally murdered in their shared apartment. Grace said she did not think Knox is telling the truth. “I believe her original statement to the police - that she was there in the home when her roommate was murdered was true,” Grace told Access Hollywood.
To this, Statement Analysis agrees.  The words that Knox initially used came from experiential memory; and the analysis that produced the results to show Casey Anthony a liar, was the same analysis that showed Amanda Knox's guilty participation in the murder.  A coerced confession shows deception.  Amanda Knox revealed participation in sexual homicide, in her language.
Social networks like Twitter and Facebook exploded with celebratory messages on Monday as the judge proclaimed Knox’s innocence, allowing the study abroad student to finally return home to Seattle, Washington after four years in an Italian prison.
Grace was not one of those supporters, saying that while she would love to believe Knox innocent, “I just happen to know the facts.” Grace was even harsher when asked if her show would compete with other networks to get the first Knox interview.
“I’m not trying to get Amanda Knox’s first interview because… my show does not pay for interviews…Second, I don’t think she’s going to tell the truth anyway, so what’s the point?” Grace responded
Knox, like Casey Anthony, will now make millions off the blood of an innocent.  Statement Analysis was applied to both in the same principles and brought forth the same results. 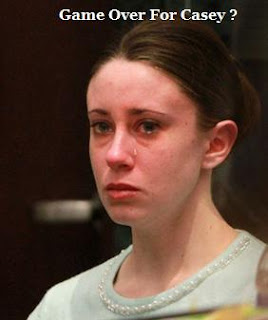 Perhaps Casey Anthony and Amanda Knox can do cartwheels together, as they laugh all the way to the bank.


Can a reality TV show be far behind for both killers?