Best Job in the World 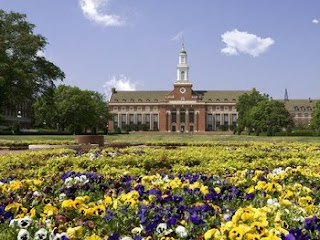 This week my oldest leaves for college. She came in to sit on my bed a few nights ago for one of our talks and as she was getting up to leave she said, ‘You know Mom, you kind of surprised me. I expected you to be really upset about me going away ... but you're not. I think I'm more worried about it than you are.”

After she left my room that night, I thought about it some more and realized she was right. I've made a few jokes about coming to work in black on Thursday—the day after my husband and I drive her up to OSU—but aside from that I'm not feeling sad or fearful, lonely or even apprehensive. Funny, but I always thought I'd be a basket case when it came time for my children to ‘fly the nest’.

I always said being ‘Mom’ was the ‘best job in the world’.

I hated when our years of homeschooling came to an end and my children went to school. I nearly fell apart from confused feelings of uselessness and regret. All I could think then was the good times were over and yet I hadn’t done nearly all I wanted to do. There was so much more I could and should have taught them, done with and for them and now it was all in the past. They had moved on. I was left behind.

I guess it can be summed up in one perfect example. Last night my second oldest daughter, Michelle, came home to get her things for a sleep-over with her girlfriends. She was in no particular hurry to leave. She apologized for interrupting the movie her father and I were watching, although we didn’t mind in the least; we were happy she wanted to spend time with “hermits” like us on a Saturday evening. That’s what both of our daughter’s call us because—as they say – we don’t drink, smoke, gamble or ‘party’.

Anyway, Michelle looked rather disconcerted as she told us that she felt ‘too old’ to be returning to high school this year. This is her senior year and she said that most of the girls she’s hung around with since her freshman year are so immature—something my husband I both hoped and prayed would happen three years ago. She described watching and listening to them from somewhere outside the group. I remember that place years ago and sometimes still when I am around certain types of people.

I told her that her sister had said at graduation her teachers were the people she thought she’d miss from her high school days.

We talked some more. Then she told me the nicest thing I think she’s ever said to me. She named her three best friends and I was one of them.

I’m not her friend of course. I’m her mother and that’s so much more important, but I know what she meant. She meant she trusts me and she knows she can come to me with her problems. And as George MacDonald said, ‘To be trusted is a greater compliment than to be loved.’

Earlier in this post I asked, ‘what’s different now?’

There’s another difference. God has given me another ‘best job in the world’. I didn’t think anything could ever top motherhood, or even come close. I thought when my children no longer needed me so much, I’d just sit around and read, write maybe, crochet and be a good little stay-at-home wife awaiting grandchildren and old age.

I was wrong again. God had other plans. He doesn’t waste anything.

He called me into active ministry—not once or twice but three times. Finally I listened and answered.

It isn’t always easy. There are many sacrifices, big and little. But there are also so many joys! I’ll just tell you about one from last night.

Besides being Director of Religious Education for my parish, I also get to serve as Extraordinary Minister of Holy Communion once a month, the greatest honor next to receiving Our LORD.

At Mass last night I gave Holy Communion to a very special little boy, ‘N’ who was in my First Communion class this year. He received Our LORD’s Body with such reverence it was as if he was receiving Him for the first time, as it should be for all of us each time but so seldom is. When I came up to ‘N’ after Mass, to compliment him, I noted he was wearing his Vacation Bible school t-shirt.

His grandfather said, “Oh yes! He loved his time at Vacation Bible School, still talks about it all the time, and is proud of his shirt.” When I complimented ‘N’ on how reverently he received Holy Communion, he told me it was his 20th time to go to Communion.

I said in astonishment, “You’re still counting each time?”

His mother smiled and said quietly aside to me, “he’ll probably never stop counting.’

This little boy is rather special in more ways than one. His slightly autistic nature causes him to be teased at times and yet there is something there which also makes him impervious to that which isn’t truly important. I smiled back at his devoted mother and grandfather. School begins soon and then I’ll be able to see little ‘N’ during the week as well as on week-ends.

After my little friend and his family left, I thanked God for this second chance, for this new job which is also such a blessing. How many jobs offer the opportunity to be part of the process of a child's First Sacrament's, facilitate fun at VBS and then witness such sanctity in a precious child of God it utterly humbles you?

Thank you God for not only loving me, but also for entrusting me with this ministry; it is such a great gift. Please dearest Jesus, continue to support and guide me in it. And watch over Your dear Meg as she journeys to college this week. She’s always been Yours Jesus, on loan to me. I’ve enjoyed and treasured every moment as her mother and I pray there are still many more to come.