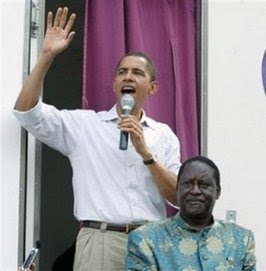 Obama & Islamic-supremacist cousin Odinga.
Obama interfered in a foreign referendum.
With American tax dollars.
To bring Sharia Law and abortion to Kenya.
Who's that behind the curtain?
Kenya gives Obama abortion, Islamic courts

Obama spent $23 million in US tax dollars to get Kenya to institute the murderously intolerant SHARIA LAW and to promote infanticide. It's not enough for him to do it in America- he's got to do it to the whole world, beginning with what, according to the unreported-by-the-dhimmi-Old-Media evidence and totally-cre...dible testimonials, may very well be his true birthplace (he has NEVER proved otherwise, those who've done scrupulous research know very well).

"Despite denials, the Obama administration's funding to support passage of the controversial Kenyan proposed constitution is clear," Jeff Sagnip, spokesman for Rep. Smith, told WND in an e-mail over the weekend. "It constitutes U.S. monetary interference in a sovereign nation's voting process."

VIOLATION OF SEPARATION OF RELIGION, STATE

The proposed constitution also would give legal status to what are known as "Kadhi Courts," constituting an Islamic judicial structure within the overall structure of the Kenyan legal structure, to resolve disputes between Muslims under Shariah law.

Critics have charged that the constitutional provision to codify Kadhi Courts would violate the separation of state and religion by allowing Islamic law to have official legal status within a special category of Islamic courts that bear constitutionally specified legal authority.

During that trip in 2006, Obama campaigned so openly for Odinga that Kenyan government spokesman Alfred Mutua went on Kenyan television on behalf of Kenyan President Kibaki to object that Obama was meddling inappropriately in Kenyan politics, as WND previously reported.

WND reported in 2008 that then-Sen. Barack Obama raised almost $1 million for Odinga during the run-up to Kenya's 2007 presidential election.

Leftwing "Proggressives" will automatically, as programmed to do so, being Useful Idiots, say, "So what?  What are you, a racist?"...

Next thing you know, Obama will interfere, and spend American tax dollars in Canada, to get the Liberals elected on a platform of tax-funded abortion and Sharia Law...  Why wouldn't he?  He did it in another country!