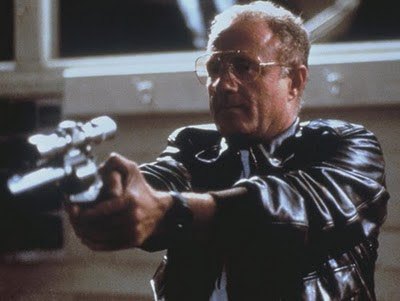 James Caan in action.
Ahh!  He has a GUN!!!  A GUN!!!  OMG!
Help!  Call Janet Napolitano!  There's a "right-wing extremist" on the loose!
Ah, but Mr. Caan will just tell the Obama-Napolitano DHS to feck off. 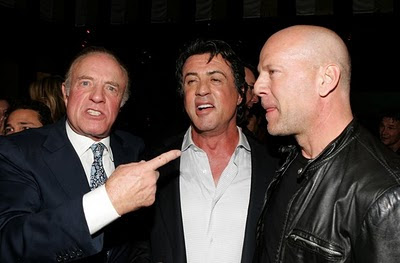 Cool to be right:
James Caan, Sly Stallone and Bruce Willis having fun at the Rocky Balboa premiere.
James Caan Refuses to Be the Typical 'Hollywood Liberal'

Veteran actor James Caan let people in on a little secret last week. After 46 successful years among Hollywood’s most outspoken liberal stars, he’s speaking up about breaking the mold.

We're your soldiers, your firefighters, your ambulance drivers/paramedics, your taxi/bus... drivers, your bankers, your family members, your doctors, your cashiers, your police officers, your friends... even your MPs and MLAs. We're the folks you see out walking our cute little doggies all the time, and thoughtfully picking up the poop so you won't step in it. We're everywhere you go, everytime! Hell, some of us have even stayed at the YMCA and found it fun! LOL Just throw your received prejudices into the trash and get with the program like the nice folks we know you are! You should strive to become able to say, "I have lots of right-wing friends! Some of my best friends are right-wing!"