It was reported last week that China is reducing the number of non-violent economic crimes (68) that are punishable by execution in that country.The stories almost uniformly reported that China executes more people than any other country.

But the stories neglected to point out that there are more Chinese in the world than any other country. There are other countries that execute more people per-capita. Almost every statistic about China is a superlative because of its size.

The traditional Chinese execution method has been firing squad (or, mostly, a single bullet to the head). Now, high tech "execution vans" roam the country to conduct executions by lethal injection. In the shooting days, families of the condemned were charged for the bullet.

I don't know of they are sent a bill for the chemical cocktail.

There was a story in Saturday's NY Times about Japan's seven execution chambers, which were opened to the Japanese media for the first time ever last week. Foreign media was excluded, as if that was somehow going to prevent the rest of the world from finding out the details!

Japan executes by hanging, and like virtually all countries, has developed a detailed, somewhat fetishistic procedure to be followed.

Some governments have yet to come to their senses about the Internet age. Blocking the media only serves to make 'em angry, and that can result in even more negative coverage than otherwise. That's not fair, but it happens.

Alabama is in the top ten for per-capital executions among U.S. States, though Texas easily wins the raw numbers prize (437 since the death penalty was reauthorized by the courts. Alabama has executed just 41 in the same time period. That's a per-capita rate of  0.179 for Texas and 0.088 for Alabama.)

Nonetheless, the Montgomery-based Equal Justice Initiative organization places Alabama at the per-capita top, and awards the state a couple of other distinctions as well:


Alabama is the only state in the country that allows elected state court judges to override jury verdicts of life imprisonment and impose death sentences without strict limiting standards. About 23% of the people on Alabama's death row received a life verdict that was overridden by a trial judge.

Alabama is also the only state in the country without a state-funded program to provide legal assistance to death row prisoners. Over half of the people currently under sentence of death in Alabama were represented at trial by appointed counsel whose compensation for trial preparation was capped by law at just $1000. 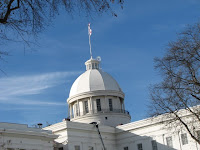 About the biggest change of heart over execution in Alabama in recent years was The Birmingham News--just about the state's most conservative newspaper-- assuming an anti-capital punishment editorial stance after more than a century of support for executions. As recently as last January, they were editorially calling for a moratorium.

And theirs was a conservatve agrument: we can't be truly pro-life and support execution at the same time.

[PLUS: On Sunday the NY Times new "Public Editor"...Arthur S. Brisbane...wrote his first column. He pledges to be a fair representative of Times' readers, at a time when those readers have a powerful new arsenal of weapons to do journalist battle with the much larger but less agile newspaper. That's a tough job, and I wish him well. I've always though a TV News operation could go a long way toward sustaining credibility by doing the same, perhaps a retired journalist from another market who could be brought in periodically to comment on the work being done by the station.]

{The Monday Morning Media Memo is a regular feature of this blog.}
Posted by friant at 11:45 PM