Where at least SOME of the oil has gone...

And that backs up scientists who said they found the oil where they least expected it...way deep in underwater trenches.

This Sunday's "On The Record" on CBS-8 features an Environmental Historian (betcha didn't know there was such a thing!) from Troy University.


I talk with her about the spill (of course), the coal ash in Perry County, the concept of environmental racism, and the upcoming decision by the EPA about whether to change the level of Ozone allowed in the Montgomery/River Region air.
If they decided to reduce the allowable amount, it could stifle industrial development in the area. The guest is Dr. Elizabeth Blum, Ph.D. 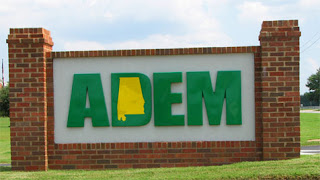 The Alabama Department of Environmental Management
Posted by friant at 11:46 AM

Email ThisBlogThis!Share to TwitterShare to FacebookShare to Pinterest
Labels: Elizabeth Blum, environmental issues, On The Record