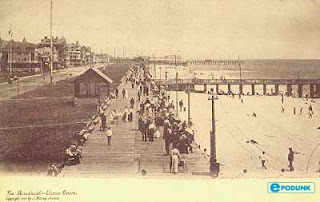 I worked and lived in Asbury Park, New Jersey*, for a while in the 70's...D.J. and radio news mostly, and it was there that I became familiar with Ocean Grove, a Methodist founded community that in some respects still reflects the 1860's when it started.

Memory tells me they closed off the streets with chains on Sundays...though I'm not sure that's true today.

Nonetheless, my friend Helen up Jersey way has sent me an article about the tent camp that springs up there each Summer...and here it is! My friend David, who still lives part of the year up that way, raves about the huge pipe organ in the auditorium and the concerts he has attended there. Helen heard Johnny Mathis sing there recently!

Anyway, just a little travelogue through my past.

[*And yes, The Boss's Mom called me to request I play his songs on the Saturday night show I did. And I would. True story! I'll bet some of  Bruce's songs were influenced by the presence of Ocean Grove!]