A Neo-Nazi socialist at the Supreme Court of the United States.

THIS is Obama's choice?

This is who the fake "Republicans" are allowing to be appointed there?

See?  THIS is WHY there is a TEA PARTY!  To put a STOP TO THIS DANGEROUS MADNESS!

NO NAZIS IN THE SUPREME COURT! 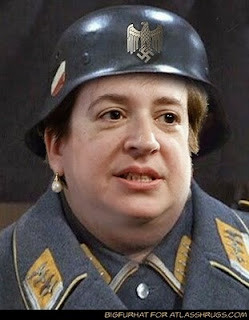 Nope, that's not the fat guy on "King of Queens".  It's Elena Kagan.
And, nope, she's not really wearing that uniform, but the sentiment is appropriate, given her extreme-socialist, dictatorial mentality, plus her citing another extreme socialist who praises Nazism.

Oh, and, by the way, abusive trolls will NOT be tolerated.  So, as I'll be away at work for a number of hours now, I'll put moderation on until I'm back...  So there'll be a nice, clean thread to enjoy tonight.
Posted by friant at 2:22 AM