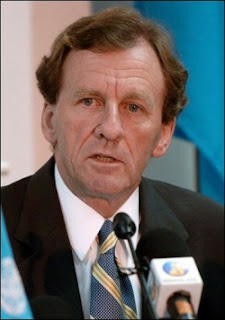 Allan Rock:  Censor?
Now we know what he said, away from Old Media cameras and microphones.
The question is now:  What did he do?
Story here.

The problem is, the kids didn’t get that memo in advance of the event. They got the one about how the administration was open to capitulating to an out of control student union headed by Seamus Wolfe, and then demonstrated that they really meant it with the Provost’s email sent to Ms Coulter in advance of her appearance.

And now, as these internal documents show, we see that it was indeed Mr. Rock who thought it a good idea for the University to lob a carefully worded under-hander to Ms Coulter just in case something resembling a free and open exchange of ideas might take place on his campus. Upon reading the letter, Mr. Rock described it as an ”excellent message” and expressed his certainty that she had “never been dressed down so elegantly in her life!” (Exclamation point included!!)

His words demonstrate quite clearly that Mr. Rock allowed his bias to affect his actions. This mattered when it was only our impression that U of Ottawa was trying to make it difficult for us to organize the event, and it matters now that we know the administration led by Mr. Rock effectively choreographed the hostile reaction that was to follow.

Damning self-implication (via gleeful expression of his prejudices) on the part of Allan Rock re aborted Coulter speech at U of Ottawa. Does it really surprise us that a former member of the merciless Chretien Liberal regime would be party to a deliberate attempt to SILENCE AN INCONVENIENT VOICE? How UN-CANADIAN can one get, Allan?

The ultra-extreme left-wing Allan Rock, he who mean-spiritedly essentially left the sufferers of government-caused Hepatitis C to fend for themselves, by denying them compensation for the harm caused by government incompetence and negligence, has brought complete shame upon the University of Ottawa, as has the Provost, A. Houle.

There must therefore be a full, public inquiry to determine whether these Elites conspired to prevent Ann Coulter from speaking by encouraging students to act like anti-free speech extremists.
Posted by friant at 3:48 PM