Ahoy there!
(pirate talk for 'Hi there!') 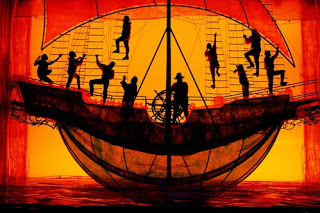 cast silhouette of a production of 'Little Mermaid'
International 'Talk Like a Pirate Day' is officially September 19th, every year.
It's a day to have fun,
a day to laugh
and definitely a day to talk like a pirate!!!
It used to be 'National Talk Like a Pirate Day' until just a few years ago.
Then, with the help of Dave Barry's column,
became an instant international success!
Arrrghhhh!!! 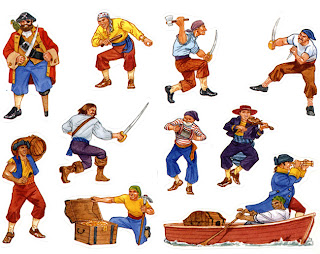 print these on sticker paper, and have fun with pirate stickers sticking all over...
Here is the official web site of TLAPD
(Talk Like A Pirate Day)
http://www.talklikeapirate.com/piratehome.html
They have all kinds of super pirate things!
There's:
The official book 'Pirattitude!: So You Wanna Be a Pirate? Here's How!'
Go to their web site, and click on the Amazon link.
I'm pretty sure they get gold coins if you do it that way!
On their official Web Site you will find fascinating things like:
Pirate Fun & Games
Pirate Personality Test
Pirate Name Generators
Pirate Songs
Pirate party kit
KNIT LIKE A PIRATE free knitting patterns
plus many many more!
Here is a free Pirate beading project for you,
courtesy of  Shala Kerrigan.
She has several more you can access from the TLAPD home site.

Pirates - not just for guys! 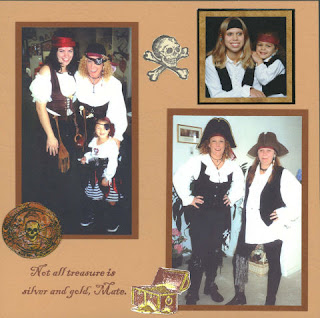 a scrapbook page from RubberStampAvenue,
using all RSA stamps! Check out Kathy's web store!
link to the right
Now, I've given you a few days to get ready for this major event.
Let's make good use of them!
Here are some pirate activities to doodle during that incredibly
DULL
meeting, class, study hour....you can fill in the blank! 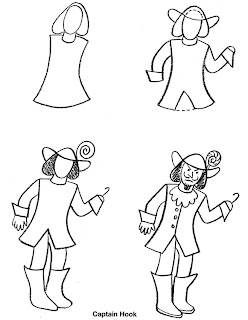 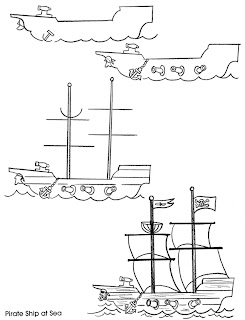 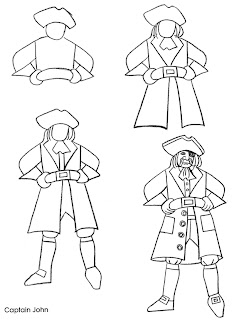 and don't forget to 'search' in my previous blog for more pirate things,
like how to draw a treasure chest, fun coloring pages,
and LOTS of pirate art and illustrations!
Yes Michael, I know,
I wrote a book for that blog! 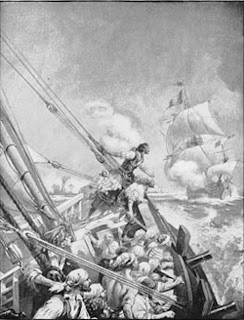 BUT....
I found a few more fun Pirate Things!
Like a couple of paper dolls: 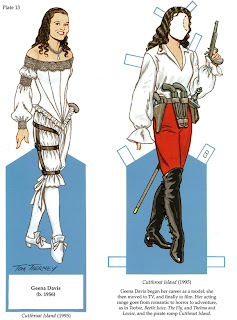 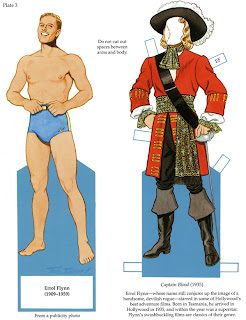 Here are a couple of costumes from Liana's that I don't think I have shown: 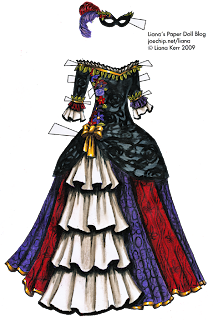 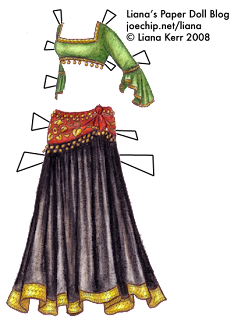 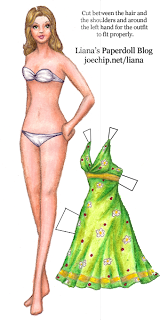 Yes, I realize the second costume is perhaps a gypsy costume,
but I think it could fit with pirates too!
These next ones are just a couple of pages from an entire set.
I will try to post the rest of the set at a later date. 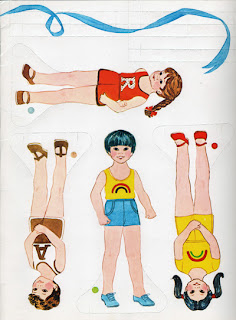 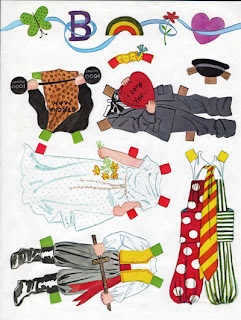 The color tabs match up with the color dots next to each doll.
Why don't you make matching pirate outfits for all the dolls? 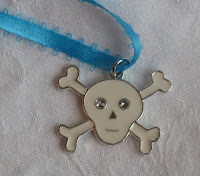 I was surprised at how few pirate costumes I found in my paper dolls section. There were LOTS of gypsies,
and then of course the black cats, clowns, and princesses.
Arrgghhhh..... 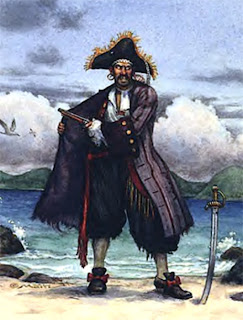 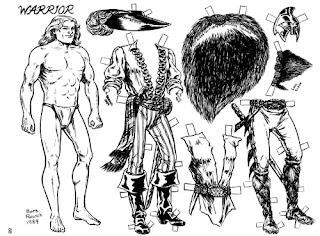 The artist's name is in tiny print to the bottom left.
Done with your doodling?
Think ahead and print a few of these off: 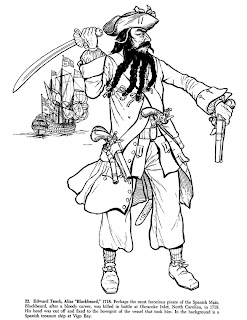 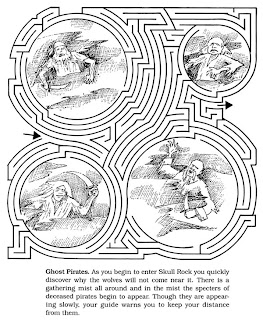 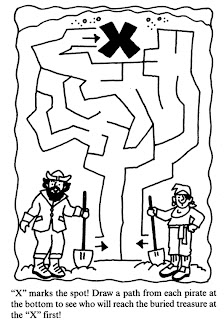 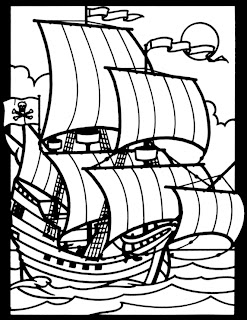 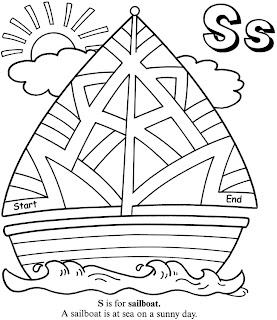 Here is another simple beading pattern for you.
Stitch these up in a row and make a bracelet!
If you want to just use the skull as a focal point,
bead the rest of the bracelet in the solid background color you have chosen.

See how the edges are all even?
That means that you can use loom or square stitch for this pattern.
If the edges were uneven, like the pattern earlier in this blog,
then you use brick or peyote stitch. 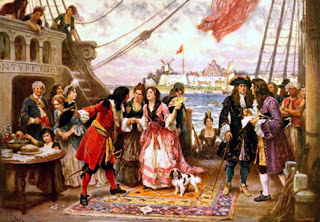 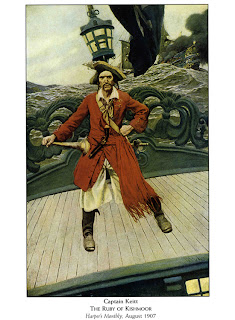 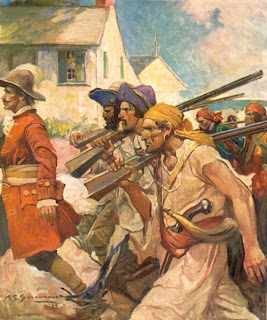 'Pirates'
Perhaps they are invading this seaside town? 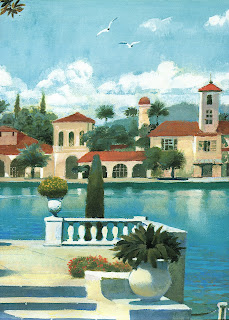 Well, ye mateys, it's time to grab some grub.
or whatever pirates call it... 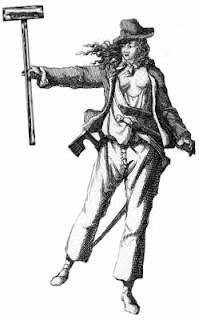